No matter how much of a quality connoisseur you may claim to be, music is almost always dependent on mood. A listener may prefer certain styles and lyrical content over flashy “trap” tunes but the entire medium as a whole exists on a spectrum. Certainly, there are different times and places for every type of listening atmosphere. Music with reflective lyrics leave a deeper impression and cause you to think about what you hear within the present and at subconscious moments. Depending on the crowd, those types of songs might also best be appreciated alone, with a significant other or a smaller group of people. For as much as lyricism is appreciated, there is a lot to be said for tracks that are upbeat and contagious in the sense that it intensifies the energy of the entire room and causes whole gatherings to receive universal enjoyment.

Someone that is firmly in between the categories of lyrical and flashy is an ATLien on a fast track to stardom. Gunna first made an appearance on the global scene in the, “With That” video by another ATL native Young Thug. That cameo granted him visibility and provided him with a certain spring in his step that swung him into perpetual motion. Gunna has been working on developing his persona and approach to musical dominance since the age of fifteen. Growing up, his mother worked as the manager of the College Park Middle School cafeteria. They weren’t poor, but did not have much which taught this young artist to chase after what rightfully belongs to him. He understood the struggle and therefore adapted to his surroundings to stretch what little he had and wisely make ends accumulate. Also, he was always the youngest out of the people he spent time around so he witnessed a fair amount and learned how to act early on. The reason why he became prominent in the hip-hop industry is due to hard work, well-calculated steps and listening to his mother. Her words of advice went like this,

Clearly, this Atlanta artist has shown the knack for constant artistic enhancement. Via various approaches and attacking the booth with different angles/perspectives Gunna has developed into one of the flyest artists in the country. Although, his words may not arrive with crystal clear pronunciation and his statements are not always the most lyrical there is no mistaking the fact that he’s got the “It Factor” that so many aspire to obtain. Part of the “It Factor” that Gunna possesses also deals with the “Drip Factor.” Gunna and his Atlanta counterpart/frequent collaborator, Lil Baby have been using the word, “Drip” to describe their “Swag” ever since they were acquainted in high school. Now that the word has gone mainstream – Lil Baby, Gunna and Young Thug can be considered the originators of the term. Regardless, whoever initially started using the colloquialism doesn’t matter. What’s important is the way that they have propelled themselves into the limelight using Atlanta lingo along with an innate ability to differentiate from the rest.

According to Gunna, the three primary components to a modern artist’s continual success are visuals, drive and production. Gunna continues to master his craft and does so under YSL Records which is a subsidiary of Kevin Liles’ 300 Entertainment. YSL stands for ‘Young Stoner Life’ or ‘Young Slime Life’ and is also a play on the designer brand ‘Yves Saint Laurent.’ Gunna does a terrific job of distinguishing his appearance through obscure fashion selections. He amplifies his collection of inherent abilities with the rare apparel that he dons. His wardrobe is a major selling point and appeals to many demographics who are legitimately interested in the glow of an artist in regards to their influence which is based upon cultural merit. With rebellious luxury, Gunna has a stronghold on the influencer generation and is a genuine connoisseur of the high fashion industry. Eventually, he will launch his own clothing line, sneaker company and invest in multiple stakes of worldwide fashion.

Gunna has capitalized off of newfound attention in a majorly monumental manner. With a silent rise and a silent, nimble delivery he has gained tons of momentum within all different types of circles. His cadences, flows and steez are well articulated and pieced together intricately as a familiar force on every verse. His projects contain topics that balance between braggadocio and authentic realism. He climbed the ranks of rap royalty with a raspy sing/rap vocal delivery and many guest appearances. As a whole, his bodies of work are refreshing due to the way that they stir feelings of ambition and cause aspirations of wealth. Pursuing his dreams with a dawg mentality, Gunna has a strong passion to improve daily. With great hustle, determination and resilience Gunna has sent his career into orbit and exists as quite the spectacle.

When the life of an OG (Keith Troupe) in the Atlanta hip-hop scene was tragically cut short it deeply affected Gunna. This man was a pivotal mentor to the young aspiring artist. Consequently, this fatal occurrence brought Young Thug and Gunna much closer together. Thus, Young Thug and Gunna have positively affected each other and their respective ascensions have exemplified this fact. Often times, they place their vocal entrances on unique timestamps which allows them to occupy certain sonic pockets that other artists are not privvy to. Furthermore, their linguistic approaches to crafting lyrics in the booth portray similarities, as well. Although, at times it is difficult to understand them, they both manage to strand together sounds that are easy to decipher. By avoiding self-monitoring or complete articulation what they are doing is incorporating informal speech in their music. Through language reduction and certain vocal intonation, the words that they piece together allows the audience to derive different interpretations based upon the words/sounds that they hear.

Gunna has made incredibly rewarding decisions along his path to superstardom. One of those has been working with a talented producer by the name of Turbo. Turbo is a perfectionist and his well-calculated methodology has gelled tremendously with Gunna’s procedures in the booth. Turbo has become a mainstay in the oversaturated realm of producers by setting himself apart. How he managed to do that is through certain types of melodies that incorporate guitar riffs. With intricate flecks of acoustic guitar strings Turbo has created a cohesive and wavy niche for himself. Many of his beats contain massive appeal because they are slow enough to be sentimental but carry a smooth enough bounce to create a lasting impact. Now, Turbo’s overview has become a key piece to Gunna’s repertoire – nearly every piece of music Gunna submits does not become finalized without the “Turbo Touch.” 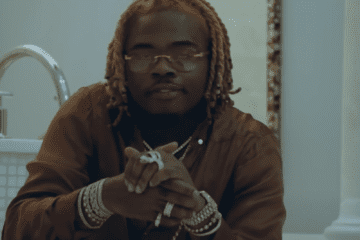 Atlanta has been prominent for quite some time and Gunna is one of many who continue to carry the torch. Clearly, the South has got somethin’ to say and that will not change anytime soon.