It is a very common theme for athletes and entrepreneurs to exist within the same spheres of influence. Much like sports, many people try but few are able to reach the upper tiers of success. Carmelo Anthony may not have excelled quite like his 2003 Draft counterparts LeBron James and Dwyane Wade, but when it comes to thriving business ventures he is second to none.

It all started when he launched Melo Enterprises the same year that he got drafted. In seven years since the inception of this company, he had completed nearly 30 different business deals. Ever since he has only continued to climb the business ladder and consistently impressed those around him. Shortly thereafter, he created his own website and continued to advance his approach en route to becoming a pioneer for athletes in the business.

Major waves swarmed around Carmelo when he branched out from the ordinary investment portfolio and decided to focus on technology. He has always been considered a gadget guy and even stays up to watch infomercials and test out different products that he may envision potential in. While in the NBA, he was inspired by the sophisticated sensors, such as Catapult, used to monitor movement and track performance. Catapult is a GPS device that would go in between his shoulder blades and track his agility, acceleration and force. The accumulation of information through these devices allowed for better recovery and preparation against opponents and potential injury/fatigue.

Claiming Total Ownership of his Legacy

When Carmelo’s wife, LaLa met NBC Executive Stuart Goldfarb, they were training for a charity boxing event in Trinity Boxing Center. LaLa went on to introduce Stuart to Carmelo and they developed a very strong connection. Together, the two launched Melo7 Tech Partners due to Anthony’s interest in wearable technology/connected devices and the lucrative nature of the ever-expanding industry. Also, Carmelo is thrilled to be apart of movements that have the potential to change the world. As mutual digital media consumers united, Melo7 was formed to invest in consumer technology startups. As an intuitive and effective duo, Goldfarb and Anthony wade through several different applications within a flooded market to decide upon companies that are truly changing the landscape of the technological environment.

Carmelo Anthony has made spectacular strides amongst NBA stars due to his highly intelligent business decisions. Previously, he profited from a Nickelodeon backed Teenage Mutant Ninja Turtle apparel that released exclusively with Macy’s. Other notable investments include stakes in companies such as Casper Mattress, ToyQube, Lyft, Orange Chef, Wine n Dine, Countertop, Champion Blend Plus and Hullabaloo a children’s education app.

Provide for the Youth

Many of Melo’s business ventures are centered around the impoverished youth. As an advocate for the young and disadvantaged, Melo has garnered a lot of awareness for those in need. His Feed the Children Foundation annually participates in Food Drives as apart of their No Hunger Holidays campaigns. They provide non-perishable food items and basic hygiene necessities in places like Houston, where 22% of children live below the poverty line. He is a major proponent of empowering the youth and transforming hunger into hope in countless communities around the country.

Another way that he has provided for young boys and girls has been through his Courts for Kids efforts. Together, his foundation teamed up with the Jim and Juli Boeheim foundation to provide new basketball courts for those in disadvantaged socioeconomic areas of Syracuse, New York and parts of Puerto Rico. With sponsors like Time Warner Cable, Chrysler and Jordan brand this campaign has done a lot to help children find a place to play hoops and seek better opportunities.

Carmelo loves quality food and understands the importance of a great dining experience. He partnered with Stratis Morfogen to open a sports bar called Mr. Big Shot which hosts Asian themed cuisine and is located near Madison Square Garden. Stratis has restaurant holdings that are associated with wonderful New York dining establishments such as Jue Lan Club and Philippe. Last year, Carmelo decided to sink another chunk of change toward the development of a sports bar and restaurant combination venture.

Carmelo invested $5 million into Nobody’s Pizza (formerly known as La Grata), which currently hosts one location on 136 Alexander Ave. near East 134th Street in the South Bronx. The menu was put together by Serafina veteran chef, Erminio Conte. By creating a three-headed monster between real estate giant Keith Rubenstein and pub chain The Ainsworth, Carmelo intends to generate about 20-30 total locations throughout a seven-year span. The Rubenstein’s real estate company, Somerset Partners owns Nobody’s Pizza and together with The Ainsworth, the three of them envision a high return on investment.

This major move illustrates Carmelo’s strategic business background and ability to capitalize on the most opportune moment.  Certainly, The Ainsworth generated significant social media buzz due to their heavily coated, 24K gold wings. Additionally, customers gravitated toward the popularity of their ridiculously layered mac and cheeseburgers. The Ainsworth maintains four locations throughout New York in Midtown, Manhattan, E. Village and Chelsea. Carmelo will build off of Nobody’s pre-existing menu that contains signature items like chicken paillard and pesto linguini with the inclusion of commonplace crowd-pleasers such as wings and burgers.

The Ainsworth and Nobody’s Pizza’s first location will be built in Nashville, TN. Rubenstein, Anthony and The Ainsworth will display their culinary choices in the form of multiple on-site bars, an assorted menu and possibly an outdoor pool. The general area for the sports bar and pizzeria combination locations will be within walking distance of nearby sporting venues.

Carmelo is very wise when it comes to business and has an advantage due to the fact that basketball is the only sport where the athletes face is predominantly displayed without blockage. He has utilized his athletic leverage in several different sporting ventures. He is an investor in SeatGeek with the Manning brothers, Vantage Sports, Draft Kings and Vice Sports where he is involved in the acting and programming of his very own show The Clubhouse. This show pulls back the veil on athletes and earned a Webby Award nomination for its magnificent behind the scenes storytelling.

Carmelo is also the owner of the Puerto Rico FC Islanders soccer team. He brought soccer back to Puerto Rico and is apart of developing them into a world-class organization. They play their matches at Juan Ramon Loubriel Stadium in Bayamon. This venue also serves as the site for the Puerto Rican national team.

Carmelo’s sporting platform, Overtime has reached nearly a $100 million dollar valuation in a very short period. Originating in Brooklyn, NY this social channel provides short and long-form video content that includes basketball highlights and illuminates the stories of young athletes on the rise. This has been one of Melo’s most successful ventures to date as Overtime has shown tremendous growth within a short timespan. Carmelo is a man that knows how to utilize the things that mean the most to our country and does so with outstanding precision. 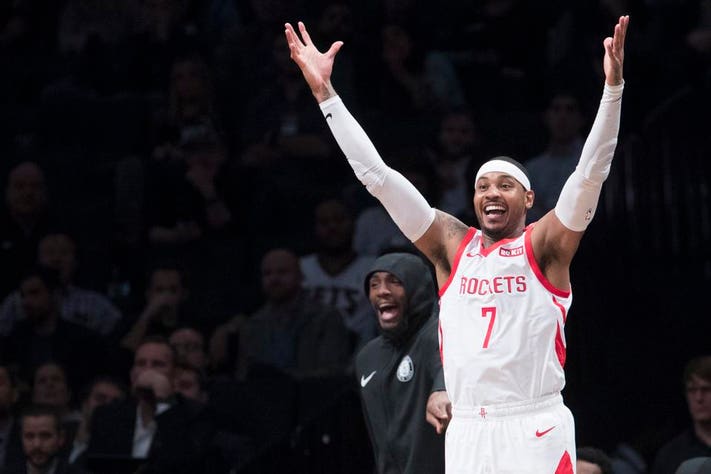