Right before Christmas 2017, Travis Scott and Quavo teamed up to release their collaborative project, Huncho Jack Jack Huncho. It marked another strand of collaborations to be concocted much along the lines of Future and Drake’s “What a Time to Be Alive” or Future and Young Thug’s “Super Slimey.” These two artists are brilliant within their own respective lanes, but may have dribbled slightly out of bounds on this one. 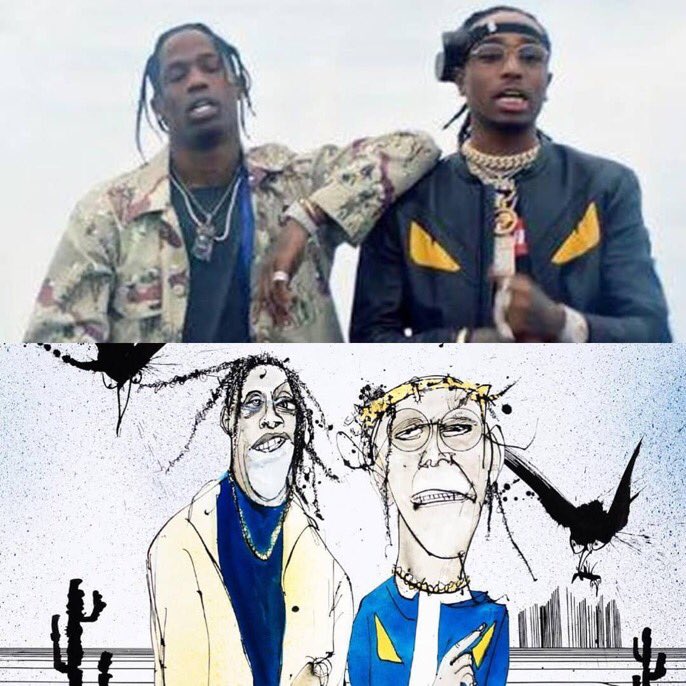 The collection is filled with robo rhythmic tunes that are equally braggadocious and repetitive. Much like the trend that continues to emerge within modern hip-hop, the production heavily outperforms the lyrical content. Although, for all of the terrific musical renditions put forth by Travis Scott it seems as if he handed off the reigns to Quavo and let him run with it. So as far as production goes, this one seems more like an effort that may have been slightly rushed and underdeveloped.

Typically, these two artists are known to put out hits together. Their hitmaking ability is evident on songs such as, “Pick Up The Phone” “Oh My Dis Side” and “Kelly Price.” They returned favors on verses via album reciprocation and appeared to have built a solid bit of chemistry throughout their duration of working together. Unfortunately, everything is not what it seems.

There are a couple of groovy songs that stand out during this collaboration upon but as an entire body of work it lacked a definitive moment. Meaning, there are no songs on here that are worthy of changing the landscape of the genre. Normally, Quavo is known for his ability to weave hooks, refine bridges and dish out influential ad libs. He is also heavily favored for his rapid fire flows and triplet combinations. Alas, his effervescence seemingly drained and came up missing throughout this project.

Collaborations often work best when artists are able to accentuate each other’s abilities. Otherwise, a collaboration could work well if the two artists are trying to best each other and going at each other’s neck. That would at least bring about a sense of competition and spirited energy even if it was contentious. On this collaboration, neither of those could be said to be true. With production from Murda Beats, Southside and Mike Dean, these artists lackadaisically spit their verses with lackluster substance and seemingly no consistent flow of energy.

Much to be Desired

On many of the songs, too much reverb and echo distort the sound in a negative manner. Their lyrics boost the consumerist culture by indulging in all of the typical vices and illuminating the topics that we are already aware of. Filled with vague imagery and no clear path of reflective expression, the collection leaves much to be desired. With monotonous delivery and reiteration, Huncho Jack does nothing to push the culture forward. Without any timeless expression, the collaboration produces a rather dull impression upon the masses.

Artists benefit most from slow development building rapport to reach solid middle ground. These two artists have seemingly worked together and built up a great lasting chemistry between each other. It is just a damn shame that their project together could not emit any of that energy.

One of the sole redeeming factors of this project comes from the artwork. Travis Scott and Quavo hired Welsh illustrator Ralph Steadman to compose their cover imagery. Steadman is well known for covering the artwork of featured writer and “gonzo journalist” Hunter S. Thompson who wrote “Fear and Loathing in Las Vegas.” Steadman became willing to venture into unknown hip-hop territory upon connecting via cellular with Travis Scott and Quavo. He remained aware that they were keen of his previous artwork and decided to take a chance by stepping outside of his comfort zone. 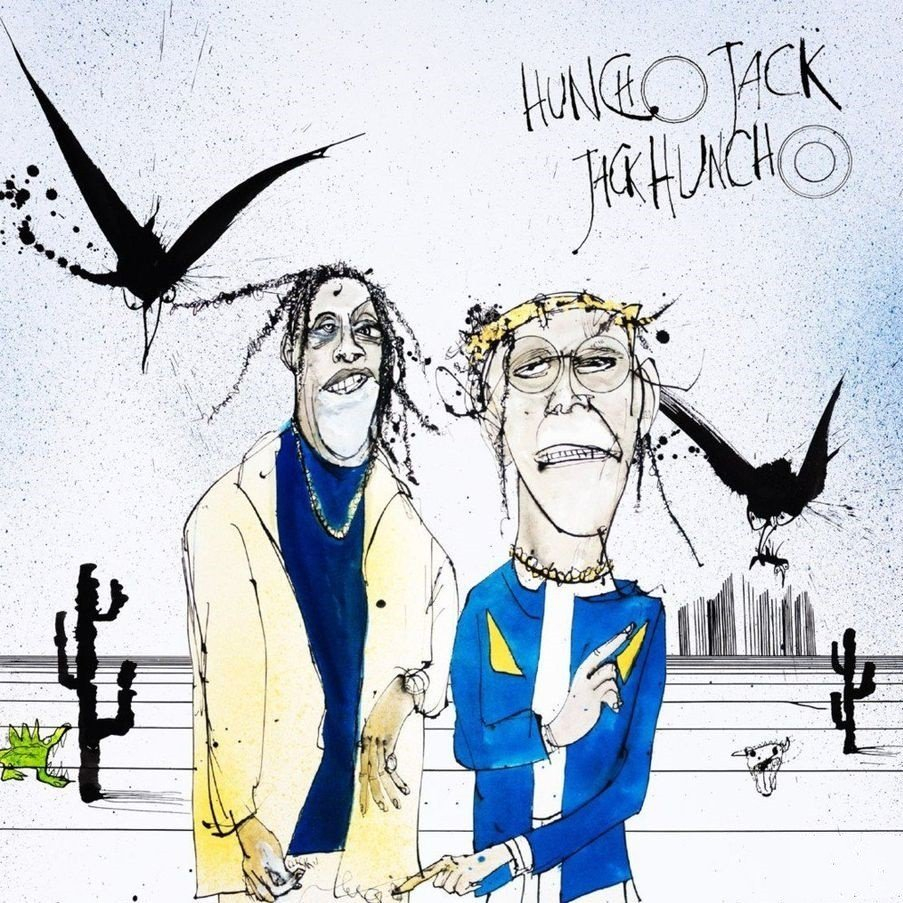 To put the strangeness of this man in perspective – In Steadman’s world horses are four-legged aliens, humans are skeletal rubber beings screaming for release, and politicians are frog-like demons. Steadman helped visualize the depraved and bacchanalian underbelly of America and its fleeting dream by channeling the weirdly ethereal into something tangible. With that being said, his artwork for Huncho Jack is eerily spectacular, tormented, abstract and apocalyptic. He thoroughly enjoyed this new opportunity and although the music was foreign to him, he found beneficial results from the enthusiasm expressed within the studio atmosphere and really enjoyed the vitality of youth released as a result.

This collection develops a pristine and perfectly sane argument for the Migos to remain together. Not all good things derive from stepping out of your typical comfort zone. I guess you don’t know if you don’t try. But by trial and error standards, this effort proved a disaster. Without any magic or connectivity through these tracks, the over year anticipation built for Huncho Jack was all for naught. For artists of such strong calibers to come together and drop such an unimpressive dud is rather unlikely. This lackluster collabo served as a conceptually brilliant piece but failed to execute. Not firing on any cylinders, these two should definitely put more consideration into their efforts if they plan on releasing a Huncho Jack sequel. With that, we appreciate the intricate artwork from Steadman and will prefer to keep it pushing until the next collaboration arises.