A truly deft symbol of the times, A$AP Rocky remains a mastermind. Last week, he released an incubative concoction of 15 tracks amalgamated by the stylized title, “TESTING.” Notably, every album Rocky releases offers capitalization and a byproduct of loss he has overcome. Therefore, on every creative collection, Rocky and his A$AP conglomerate have had to suffer the  loss of an influential member. On this album, it is evident that Rocky misses the intertwined mind of A$AP Yams who provided quite the sense of direction and cohesion throughout his lifespan.

“This is a very mature album. This album should’ve been called Testing Vulnerability because I’m just giving y’all my vulnerable siDe and there’s no holding back.”(BB)

TESTING serves as a nebulous and formidable musique striation complete with fascinating and disorienting tracks of mood music. Throughout its emergence, the project received a preface of chaotic and loose singles like, “Bad Company” (feat. Blocboy JB), Herojuana Blunts and Distorted Records.” None of the aforementioned flurry of singles translated into an album form and if they did they were greatly altered. Such is the byproduct of A$AP Rocky’s most recent interpolation of skeletal trap.

Certainly, that PMF Rocky knows no boundaries when it comes to stretching limitations and experimentation. With warped and modulated melodies, Rocky fuses sounds from all over the globe into this outpouring of reverberations and regurgitations. His penchant for experimentation shows no awareness of margins or parameters, as those types of “boxed-in” mentalities never accompanied an A$AP mindset. Some of the most impressive samples include the likenesses of Melbourne, Australian artists Finatik and Zac, British Jazz musician Roger Webb and Lauryn Hill’s, “I Gotta Find Peace of Mind” from her MTV Unplugged 2.0 performance.

With freshly unleashed creative frequencies and finely tuned nuanced sounds, TESTING sparks global pandemonium. Impressionistic works, liberal approaches, crash dummy imagery, and out of this stratosphere sonic depictions all played a major role on the album. With a grandstand boundary push, Rocky completely changes the context and texture of the hip-hop genre. To illustrate, in typical A$AP Rocky fashion, he destroys the pre-existing realm in favor of his own construction, the trip-hop genre.

Undoubtedly, trip-hop and TESTING become synonymous thanks to A$AP’s psychedelic charisma and willingness to sacrifice lyricism for sonic gains. Hence, he toys with the idea that socialization into a creative scope separates humans into smaller dominions than the sphere of our possibilities may lead to believe. Thus, Rocky’s dwindling rap verses arrive in place of the cultivation toward an intriguing, sensory experience. Much like an LSD journey, these audacious, trippy vocal harmonies flow like a manifestation of newfound color schemes and extraterrestrial encounters.

Therefore, TESTING develops as a logical conclusion of a journey beyond hip-hop’s spatial continuum. As a hodgepodge of stylistic experiments, it exudes vibrant life. The AWGE generally delivers myth making syncopated electro meltdowns of sonic pulsations. With crisp trap snares, fluorescent wavelength decoration, and fearless bravado the project fuses victory with melancholy in an equal manner. Chocked full of ideas, but lacking purpose, Rocky incorporates outside information and stylistic shape-shifting to bolster his stock. At times, the album runs parallel to the existence of purposefully confused indifference. The aspects of vocal inflection, pitch shifts and elemental experimentation remind us that it is indeed authentic Rocky.

As a series of creative trials executed in a well-calculated manner, “TESTING” exemplifies good taste and synergy. Almost all of the album’s elements pass the checklist for a vintage Rocky compilation. For one, it fulfills nostalgic purposes and contains countless chopped and screwed vibrations. Most importantly, it demonstrates a risky balance of style and substance. It speaks to the spirit of A$AP Yams, in terms of validated and energetic songs.

Unconventionally, the rollout for this album surfaced within an unusual style. First, the nontraditional listening party saw Rocky singing over the songs and starting moshpits while encouraging listeners to “listen closely” rather than simply enjoy free consumption of substances. 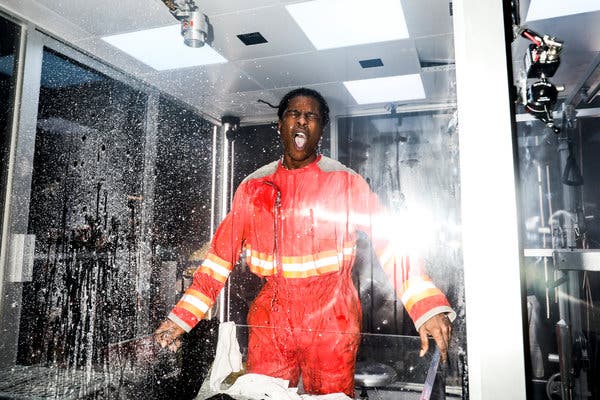 On the downside, there are a few minor miscalculations to address. The impartial listener might experience difficulty during “TESTING” due to the lack of a centralized narrative. At times, Rocky leans too far into the muse of the aesthetic and away from the quality of auditory content. Certainly, the sensory experience derived from the nuanced sounds are ahead of its time. But the album feels relatively unkempt almost as an entangled web of sounds rather than a cohesive combination. Rightfully so, the album could have been divided up into a cluster of singles that packed more of a punch on their own. With instinctual sonic experimentation, “TESTING” is densely layered without much depth.