In the beginning, Shane created graphic tee shirts that featured monochromatic images of Miles Davis that resembled the design of Raf Simons. While all of his peers tended to zig, Shane forced himself to zag. Rather than following the prototypical layout of hoodies, shirts and hats, Gonzales opted for a myriad of different silhouettes. The key element within each of his designed collection fixates upon reconstruction and reincorporation.

As a designer, Shane scrapped his initial brand, Stay Dirty Co after two years in favor of Midnight Studios. What started with tee shirts has blossomed into a full blown assemblage of unique atmospheric interpretations. The enigmatic archives push themselves to the forefront of fashion circles with a DIY attitude and perspective.

“The whole do-it-yourself aspect of it, kind of taking everyday clothes and throwing paint on them or random prints or cutting them up and ripping out sections—that’s where I became fascinated with the whole style.” (ESQ)

Rather than relying upon “influencers” Shane focuses upon the designers with well-documented skillsets. His brand has been considered to be a culmination of London punk and youth street styles that constantly evolve. His brand approach references obscure punk rock bands in a manner that undertakes tour merchandise that certain bands never had access to or the ability to produce.

Some of Midnight Studios largest impact derives from Raf Simons, Jun Takahashi and Takahiro Miyashita. It is clear that rock and roll engraved itself deeply into the mentality of Midnight Studios. By promoting an edgy subculture, Gonzales transformed thrift store finds into evolved versions of fashion liberation. 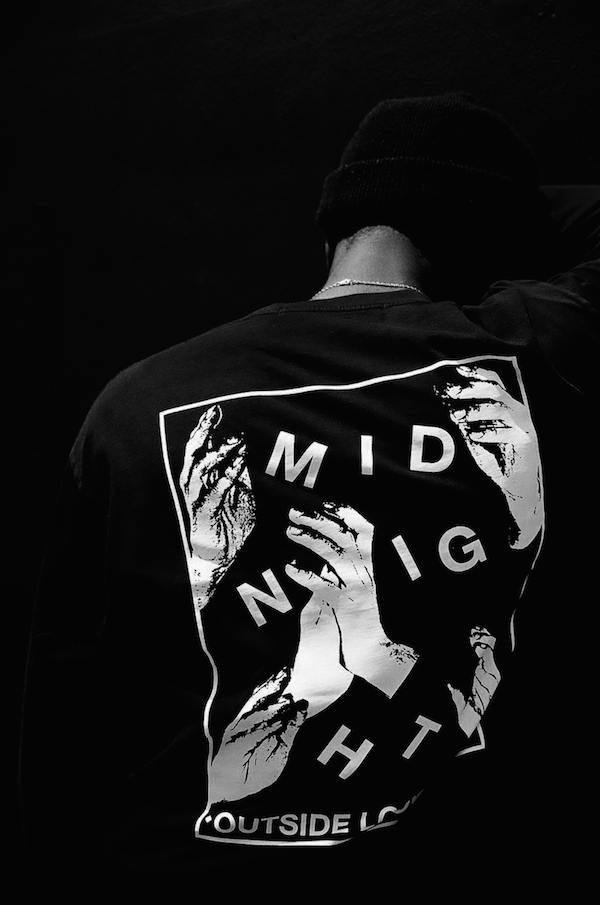 Many of the concepts and thematics behind Midnight Studios derive from the striking moments that occurred throughout Shane’s childhood. What may be most striking is the ability of this designer to receive inspiration from the most mundane and ordinary ideals. Ordinary people and everyday life affect the tangible direction by which Midnight Studios travels.

As is the case with every fashion movement, all Midnight Studios needed was a small push into the limelight and it has soared. Around 2014, Ian Connor connected A$AP Rocky with Shane Gonzales. Since, collaborations with Converse, Off-White and AWGE are a few of Midnight’s fashion momentos. Virgil Abloh served as an instrumental piece of Midnight Studios, as the duo’s split collaborative garments made its way to important Paris runways. As a mentor, despite slightly different thematic and conceptual schemes, Virgil and Shane have always kept their interactions simplistic and their material exclusive.

Presently, Shane sets his sights on brand longevity, variety and possibly a flagship location. Eventually, this talented young designer will branch off into the realm of footwear and fashion runways. As a covert, thought-provoking minimalist, Shane shatters perceptual boundaries and paves a lane for unlimited self-expression.